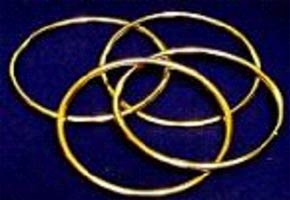 The history of magic dates back as far as 2300 B.C., when some scholars argue that hieroglyphics found on an Egyptian tomb represents the famous “balls and cup” trick. An Egyptian man named Dedi is credited with creating the trick. He was known for entertaining pyramid slaves by making pigeons and chickens disappear and reappear. The earliest man to be given the name “magician” is Westcar Papyrus (1700 B.C.) One of his better-known talents called for decapitating birds and then miraculously bringing them back to life. The Chinese are also credited with inventing some of the earliest forms of magic. The ancient Chinese Linking Rings trick, in which several solid metal rings link and unlink themselves, is still used today.

In the Bible and other ancient manuscripts, there are many references to magic. A magician at the time of Jesus, known as Simon Magus, enthralled his audiences by appearing to fly from one end of a room to the other. Often times, magic was used to fuel superstition. Priests in Greece would rig temple doors to open and fires to burn without any apparent human effort. Superstitious beliefs and trickery convinced many people of the Middle Ages that magicians were sorcerers with supernatural powers. Many royal courts and palaces had their own magician who also served as an astrologist or a fortune teller.

In America, the first magicians were Native American shamans. They would pretend to cure disease by spitting out chicken bones and blood after they appeared to suck the diseased areas out of a sick person. They also appeared to perform feats of levitation by “floating” arrows around the campfire which were actually tied by horse hair.

Magic was not widely used as a performance art until it was turned into its present-day form by Jean Eugene Robert-Houdin. Robert-Houdin is often referred to as the “Father of Modern Magic.” Not to be confused with the later-acclaimed Harry Houdini (who took his stage name in honor of Houdin, and added the “I”). Houdin could have been better described as an engineer, for he was known for inventing astonishing mechanical wonders.

One of his creations was called the Light and Heavy box, which Houdin controlled using electromagnetic principles. He could manipulate the box by turning a magnet so that a child could lift it, but the strongest man could not. Houdin used this device to deceive men into thinking that he had weakened them. His simple invention baffled many men who tried to overcome it.

Arguably, the most famous magician of the late nineteenth and twentieth centuries was Harry Houdini (born Erich Weiss). Houdini was most famous for his ability to escape any kind of restraint. In his late teens, Houdini pursued magic to avoid going into factory work. He initially teamed up with his brother, Theodore “Dash” Weiss, and they were known as “The Houdini Brothers”. His future wife, Wilhelmina Beatrice “Bess” Rahner soon replaced Dash, and their act was simply known as “The Houdinis”.

In his early work, Houdini was not very successful. However, as his solo career began to blossom, he began to develop some of his more infamous deceptions. One of his earlier successes was the Needle Trick: He would swallow many needles and thread; then he would pull the thread out of his mouth with all of the needles threaded on.

Houdini’s fame took off when he began performing the Challenge Act. Originally, this act required that he escape from any pair of handcuffs given to him. He later expanded the act to include escaping from jail cells, cuffed bridge jumps, padlocked gates thrown into water, and even sealed mail packages without creating a single tear. One of his more memorable escape routines was the straight jacket escape: Houdini would suspend himself above the ground held by his ankles while simultaneously working his way out of the jacket.

Today, there are several magicians who have received wide notoriety in recent years, and many of them have gained the public eye by performing on television. Among them is one who has thrilled audiences through his live television specials for over twenty years: David Copperfield. Copperfield started performing magic at a very early age and was the youngest person to ever become part of the Society of American Magicians. At the mere age of 16, he began to teach a course in magic at New York University. Copperfield is best-known for his elaborate large-scale illusions. His most famous feat is making the Statue of Liberty vanish. In the past, he has performed about five hundred shows a year doing a variety of illusions including walking through the Great Wall of China, flying through space, and making volunteers disappear and reappear in unusual places.

Another newly famed American illusionist and stunt performer is David Blaine. He started as a street performer doing close-up magic such as card tricks, levitation, and bringing flies back to life. His videos and television specials all involve some kind of “street magic” which is where Blaine got his start by performing simple card tricks and sleight of hand tricks.

One of Blaine’s most publicized stunts was his ABC Special: David Blaine: Drowned Alive, in which Blaine was submerged in water in a human-sized aquarium for seven days and seven nights in New York City. He is also known for spending seven days inside a glass coffin being “buried alive,” standing on a 105 ft high pillar for two-and-a-half days, and being suspended over the River Thames in London for 44 days.

Very recently, a magician seen frequently on television is Criss Angel. His talents go somewhat beyond the norm in the magician realm: Angel is an illusionist, but he is also an actor, a hypnotist, a musician, and a stunt performer. He is the creator and star of the A & E Network show Criss Angel Mindfreak, which had its debut in 2005. During his show, Angel has performed various feats of levitation and telekinesis which he attributed to mind/body/spirit power he attained through meditation. He has also done some stunts including cutting people in half, disappearing after a motorcycle jump, and stopping his pulse.

The art of magic encompasses a great many illusions. Like doctors, magicians vary greatly in their specialization. Some magicians are more traditional, doing sleight of hand tricks, and entertaining on a smaller scale. Others dabble in illusion and hypnotism. Some tailor their acts to work best in front of a small crowd, while others require an amphitheatre, dramatic lighting and music.

Magicians can tailor a variety of magic acts to fit an occasion. Birthdays shows are perfect for any crowd less than 30 people, and they usually last about 25 minutes. A magician might ask the crowd to participate in a disappearing card trick. The routine is tailored to fit the audience by age and size, but can involve stage magic and other sleight of hand illusions. Some magicians have the ability incorporate an animal into their routine. To round-off the routine, the magician can finish out the hour with face painting or balloon sculpting.

Larger shows require a lot more time, effort, and equipment. A magician will often need to take time before the show to make sure that he has an adequate sound system setup and ready to deliver mood-enhancing music. These shows tend to have magic on a larger scale, intended to entertain dozens of audience members. You may see a volunteer become sawed in half or the magician may make a large object completely disappear. Some magicians have been known to make objects fly around the stage. Others have elaborate fire magic, including juggling.

Although the art of magic dates back thousands of years, it still remains one of the most mystifying arts of our times. From centuries of study and development, magicians have an infallible set of tricks available and new ones are created all the time. Due to the nature of practicing magic (and its ability to be customized for small or large audiences) it is an excellent choice of entertainment for all kinds of events. With the countless ways that magic can be performed, it is an ideal choice for all kinds of endeavors